It’s easy to succumb to the illusions of seduction when they hit us where we are susceptible and cannot see clearly.

Many years ago there was an Emperor so exceedingly fond of new clothes that he spent all his money on being well dressed. He cared nothing about reviewing his soldiers, going to the theatre, or going for a ride in his carriage, except to show off his new clothes.

In the great city where he lived, life was always gay. Every day many strangers came to town, and among them one day came two swindlers. They let it be known they were weavers, and they said they could weave the most magnificent fabrics imaginable. Not only were their colors and patterns uncommonly fine, but clothes made of this cloth had a wonderful way of becoming invisible to anyone who was unfit for his office, or who was unusually stupid.

“Those would be just the clothes for me,” thought the Emperor. “If I wore them I would be able to discover which men in my empire are unfit for their posts. And I could tell the wise men from the fools. Yes, I certainly must get some of the stuff woven for me right away.”

So the emperor enlisted the swindlers and gave them everything they asked for to weave these wondrous fabrics and make clothes from them. Of course, word of the emperor’s new project got out quickly:

The whole town knew about the cloth’s peculiar power, and all were impatient to find out how stupid their neighbors were.

We know how the story ends: Everyone confirms to themselves and others how beautiful the invisible fabric is in order not to look incompetent or stupid. The emperor lets himself be talked into wearing the new clothes at the next parade and the whole country attends. People surpass each other in exclamations of admiration for the emperor’s unparalleled wardrobe: No costume the Emperor had worn before was ever such a complete success. Until a small child in the crowd says what everyone sees and does not want to believe: the emperor had nothing on.

Usually this fairy tale is read as a farce about state officials and elites, and used metaphorically in this context. However, it’s worth studying this story in its deeper facets because it provides detailed information about the motives that make us susceptible to nebulous promises. Furthermore, it shows how the arrows we aim outwards return to us like boomerangs.

First, we learn that the emperor sets great store in new clothes and their presentation. His vanity and addiction to admiration make him receptive to the weavers’ alleged craft, even when none of it is visible yet.

Next, the swindlers serve up a bold promise: the magnificent clothes they make are invisible for anyone “who is either unfit for his office or unusually stupid.” Of course, the emperor first thinks of everyone else and of the power he would gain with this knowledge, providing a large access point for seduction.

The peoples’ reaction shows us a third access point: jealousy and ill-will. Everyone wants to know their neighbor’s secrets just to feel better about themselves. This makes them inclined to put faith in the so-called weavers, even if only to get back at one another.

All this obscures the perception of what is already obvious during production: the clothes are not invisible, they simply don’t exist. They only exist in fantasies strengthened by people’s group think. Until a child simply states the obvious:

“But he hasn’t got anything on,” a little child said.

“But he hasn’t got anything on!” the whole town cried out at last.

The Emperor shivered, for he suspected they were right…

Well… a child must be believed, because it has no concepts of office, fitness or intelligence and what they mean in the world of adults; a child is innocent, because vanity, hunger for power and envy have not taken hold in its being. 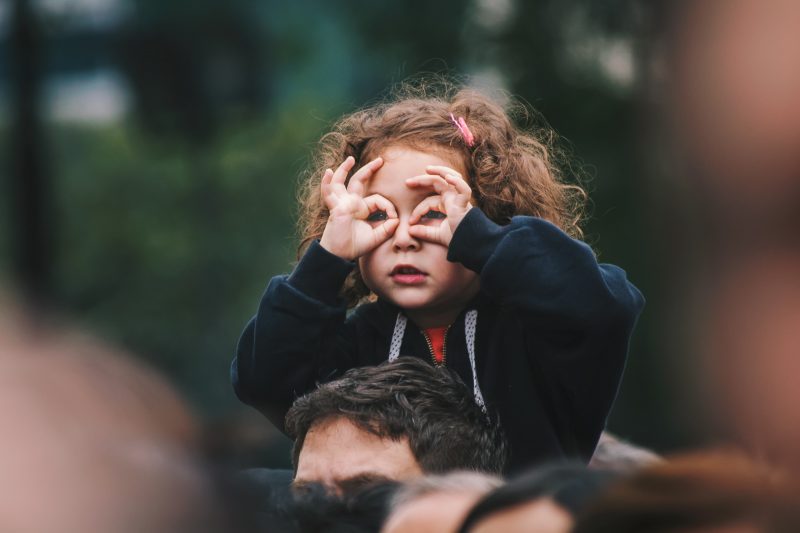 It’s easy to succumb to the illusions of seduction when they hit us where we are susceptible and therefore cannot see clearly. But the consequences come all too soon: when the people, the emperor and his entourage realize that the whole thing is about themselves rather than the others, it’s already too late and they are literally exposed in their small-mindedness and their gullibility. After all, the emperor has nothing on.

Just like a boomerang, the exact insight our fairy tale hero wanted to gain about others for reasons of power and superiority is turned around to expose himself. After all, who could possibly be fit for his office if he couldn’t resist this seduction? And who but a complete fool would fall for the swindlers’ trick?

This leaves us with the choice to hide in shame of our own fallibility, or to bring the matter to an end, head held high in the knowledge of our own nakedness:

But he thought, “This procession has got to go on.” So he walked more proudly than ever, as his noblemen held high the train that wasn’t there at all.

What we can learn

Of course, not all illusory promises we encounter in daily life are as obvious as those in fairy tales. The ideas that seduce us are often much more subtle: supposed new trends we can’t afford to miss, nebulous promises of success without realistic time frames, to name only a few. The susceptibility for seduction is often found in situations where we are not acting from a place of shared goals, but from an individual desire for recognition, the desire for control, or the fear of humiliation based on real or imagined inadequacies. And before we single these out in others or perhaps even use them for blaming, it’s worth trying to pre-empt the boomerang effect by checking our own susceptibilities and motives. After all, it’s always easier to change oneself than to change someone else.

At the same time, the fairy tale gives us wonderful metaphors for broaching the problematics of a possible seduction without attacking or exposing individuals. We learn how effective a child-like approach to reality can be. We can avoid many mistakes by taking on the perspective of an innocent child at least sometimes during decision making processes or at the start of a new project.

In the same way, we can also test apparently simple or naïve comments of others for whether they speak to a truth that we may have simply overlooked in the heat of combat. And we can do all this in advance, before we end up in the uncomfortable position of the emperor having to end the procession naked.

Swaan Barrett tells these and other fairy tales from business as live talks for your special occasions.