How minimal changes can lead to maximum results

Without fixed points of orientation, a ship on the high seas follows a specific course in order to reach its destination. This course is constantly adjusted according to the changing conditions of the weather and the sea, since the smallest variation can result in the ship arriving somewhere completely different than originally intended. The longer it continues on a different course, the greater the divergence from the old one. Correcting the deviation becomes an increasingly complicated task, sometimes even requiring a return to the original point of departure. Regular, small corrections to the course ensure that this does not happen. These corrections can be calculated in advance because the course of a ship towards its destination is a linear phenomenon. The result is predictable – as long as no unforeseen circumstances such as weather or turbulence come into play.

In contrast to charting a course towards a clear destination, weather and turbulences are living, non-linear phenomena that have been researched in the mathematical field of chaos theory. Here too, small steps can have a big impact, but the results are unpredictable and sometimes incredibly surprising. Unlike the calculation of a navigational course, it is impossible to say how even the smallest change to the base conditions affects the development of a non-linear dynamic system in the long term. US-American mathematician, meteorologist and father of chaos theory Edward Lorenz coined the term “butterfly effect” in a lecture about the sensitivity of systems relative to their own originating circumstances, i.e. their starting point. According to his calculations, the soft flap of a butterfly’s wings can provoke a miniscule atmospheric change in one part of the world that unleashes a tornado in another part.

These are examples of the possible effects of small and unspectacular steps. In some cases we can see and know exactly how an adjustment changes things. In others we cannot know whether a minimal deviation has any effect at all or whether the tremendous scope of its result will surprise us. And just as often, an effect can barely be traced back to its source at all.

What does that mean for us and our lives in complex systems such as organizations? Could a lost pencil trigger a winding series of events that lead to a company’s eventual downfall? Or could a kind word at the right moment provoke a sudden jump in sales? The linear principle of cause and effect can never fully explain the workings of complex systems. Organizations are not machines, and they don’t run like clockwork. Rather, they are defined by the human factor. That’s why the impact of our actions can only be predicted up to a certain point. Similar to navigation at sea, we need to manage linear, goal-oriented processes within complex, non-linear and dynamic systems.

Like it or not, we need to live with a certain degree of not-knowing and uncertainty. For no matter how much data we collect and analyze about a certain situation, we can at best make conjectures about its result – like a weather forecast.

This is why the agile principle of short-term sprints is very helpful in complex systems. Instead of working through a firm plan over a long period of time, small, manageable steps are agreed upon over a short time span and then evaluated before the next step is defined. Thus, regular corrections and adjustments can be made, and the goal can unfold along with the process.

With a clear goal in mind, we can have a big impact even beyond our original expectations by continuously correcting and adjusting our course according to circumstances. They ensure that we can actually reach the goal we are aiming for, even if we encounter turbulence and sea changes along the way.

Thus it’s worthwhile to sharpen our perception of small changes that can lead you off course  – at a time when they can still be corrected easily. If you wait too long, finding your way back to the right track may involve costly detours or backslides, slowing you down significantly before you can pick up the pace again.

In the positive sense, a deviation from a seemingly fixed route may bring you to a new destination – which sometimes leads to even better results. When you want to leave a chosen path behind or achieve a different goal, a small step in the new direction which is then maintained consistently will get you there.

In complex situations such as deep transformation or disruption, it is most useful not to pre-define a goal in all its details, but to let it develop and unfold as part of a process. In order to maintain a sense of orientation , it is key to look at things from a bird’s eye view and see individual steps in the context of the big picture.

How did a single step get us further along the path? What happened as a result, both expected and unexpected? What changes have taken place in the surroundings that must be taken into account when deciding on the next step? What is feasible now? What do we want to try next, and when? 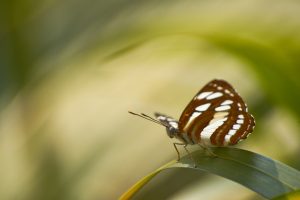 If implemented mindfully, such processes of reflection can lead to foundational and sustainable change in complex systems. An impartial attitude grounded in the beginner’s mind sharpens our awareness of the little things with potentially great impact, like the butterfly effect. Dialogues based on the ideas of David Bohm are also a valuable resource for navigating transformational processes, because these conversation circles enable possible deviations to become visible and re-synchronized into the big picture.

In addition, these short meetings strengthen team spirit and a collective sense of direction, so that the small steps along the path become an integral part of the goal. We begin to understand the consequences of our everyday actions and become more mindful about the way we treat each other.

We may even realize in the process that whether or not a tree falls in the woods is not quite as irrelevant as we thought, even if no one hears it hit the ground at first!

What is your next small step?

I look forward to a dialogue with you!